Dennis and I celebrated the end of 2019 by going to a friend’s farm to clear some long-dead oak and hickory trees from his property. We were negligent in getting ahead on wood cutting this season, we needed firewood, and Jim has always been generous with letting us come to the farm to gather wood.

There’s something we cherish about driving our red and white 1987 Ford 250 out to Jim’s farm; life feels simpler when we are doing the actual business of the Zen directive to chop wood, carry water. It seems we don’t often make time to just sit and talk — we’re always working (albeit together): rehearsing or arranging or discussing booking routes or how to market our music or recording or attempting (again) to shoot some video — but less often do we take the time to just “be” a couple.

So I took the drive time to bring up some of the challenges I was feeling after a less than gangbusters year on the road — my discouragement, my emotional exhaustion, my feelings of “what’s the point.” When we arrived at this particular stand of trees, we were deep in it. But once the engine was cut, the cab of the truck got cold fast and it was later in the afternoon than we would have liked, so we put it on hold while we got to work, him sawing the wood, me hauling the heavy, dense sections to the rusted and dinged up truck bed.

It was cold but we were grateful for the lack of bitter wind. The dead trees were in amongst thick growth and we could only back the truck in so far. I routinely had my hat snatched off my head by a low-hanging branch or my pants snagged by an errant thorny branch. The trunk of the hickory was thick and wide and my small hands could only pick one log up at time, so there were a lot of steps back and forth to the truck.

With an eight food bed and that International diesel engine, our truck is definitely a work horse. When I threw the first log into that long bed, its ring was hollow, echoey, and the task of filling it up felt harder than usual. It seemed like it would be another day before the bed was full enough to justify quitting. While he cut and I carried, our conversation hung over us like the long shadows of the tall trees and the falling winter light in the western sky. 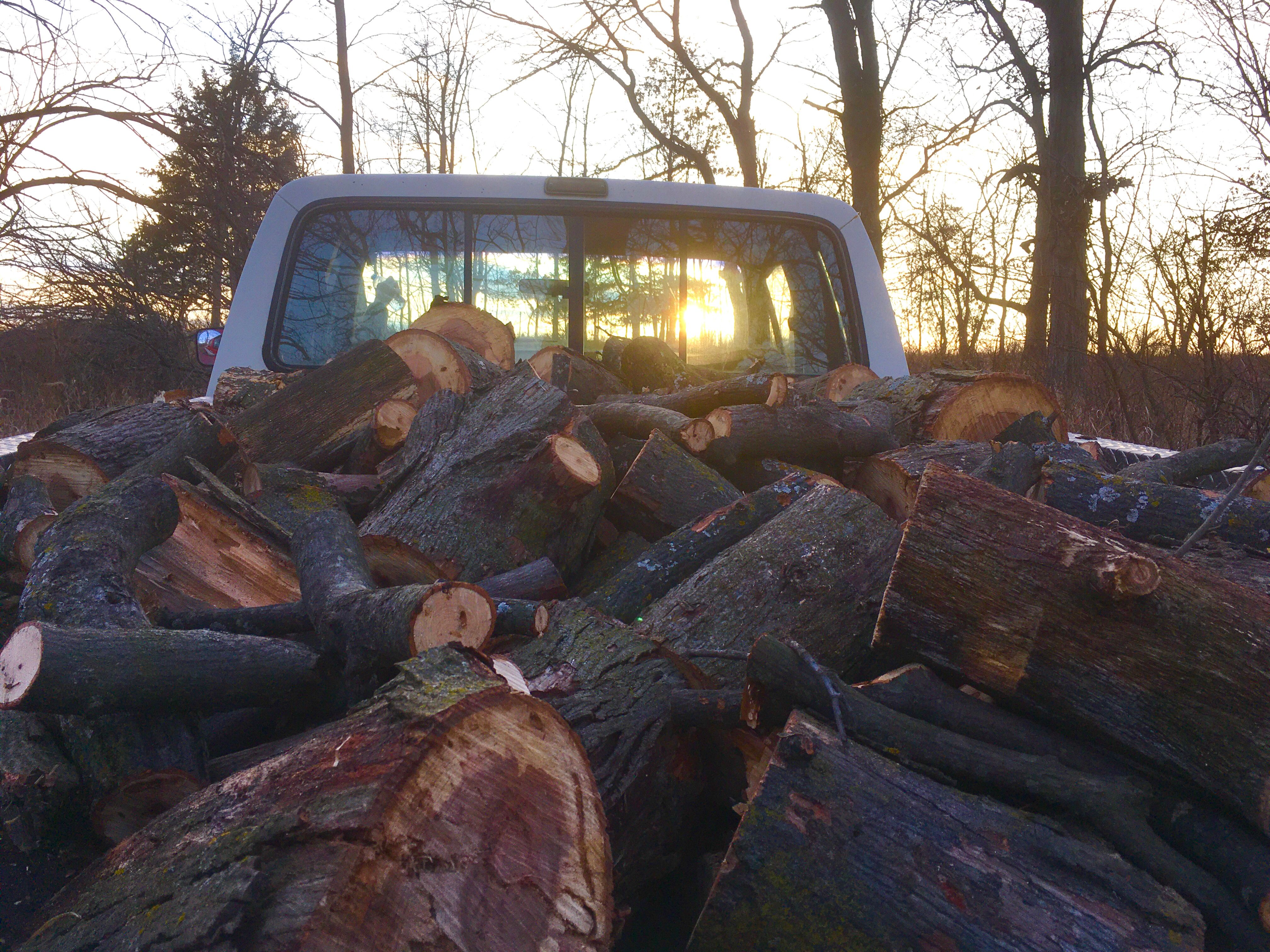 We did eventually fill the truck bed, just as the last of the sun slipped below the horizon.

The next day, the first day of the new year, the first day of the new decade, I got one of the many email newsletters to which I subscribe, an email about choosing a word of the year. I’ve done that the last few years, but had forgotten about it this year, until I got the email. So I just sat there in silence after reading the email until it came to me: Faith. My word for 2020 would be faith.

And it’s not that I don’t have faith — this career truly requires a quantum leap of faith — it’s just that Dennis’s is of the constant variety and mine seems to come in waves, ebbing and flowing and flowing and ebbing. I know it drives him crazy, because it’s sometimes hard for him to know where I stand; when I have faith, there is no stopping me.

And when I don’t? Well, that’s where I was on New Year’s Eve and it’s a grim place. Because when I land there I just want to quit. I want to go get a job in a grocery store and not worry about Spotify numbers or how many gigs we have on the calendar or the stats on our videos or any of that stuff that doesn’t matter at all at the same time that it is the difference between music being a hobby or a career.

When we arrived home that New Year’s Eve day we again sat in the truck talking. I realized then that all I really needed was someone to tell me to keep going. I do such a good job of telling all of my friends that, of being the cheerleader for everyone else, but I often forget to cheer myself on. I forget to say, “help, please.” I told that to Dennis through my tears and, as simple as it was, when he quietly said, “keep going,” I knew I would. I knew I would be okay and I would keep going and I would probably have to have this conversation again (and again and again — and in fact, we had it yet a week later) but that I had to have faith.

And here’s the thing. This was not the blog post I set out to write, not even close. But now that I realize the blog post was about faith, I know I still have so much more to say on the topic (the photo below being one of those things I want to talk about). But there is a video to be shot and a record to be recorded, so I am going to leave this as part one, to be continued in the very near future.

In the meantime, I’m grateful for the fire in the wood stove, a husband who has faith (so much faith, especially in me, even when I lose faith in myself), and a world that keeps giving me reasons to have faith, in spite of the mad times we sometimes feel like we’re living in. So yeah, I’m going to keep going. And in case you need to be reminded yourself, in case you need a cheerleader? I’m here for you: Keep. Going. 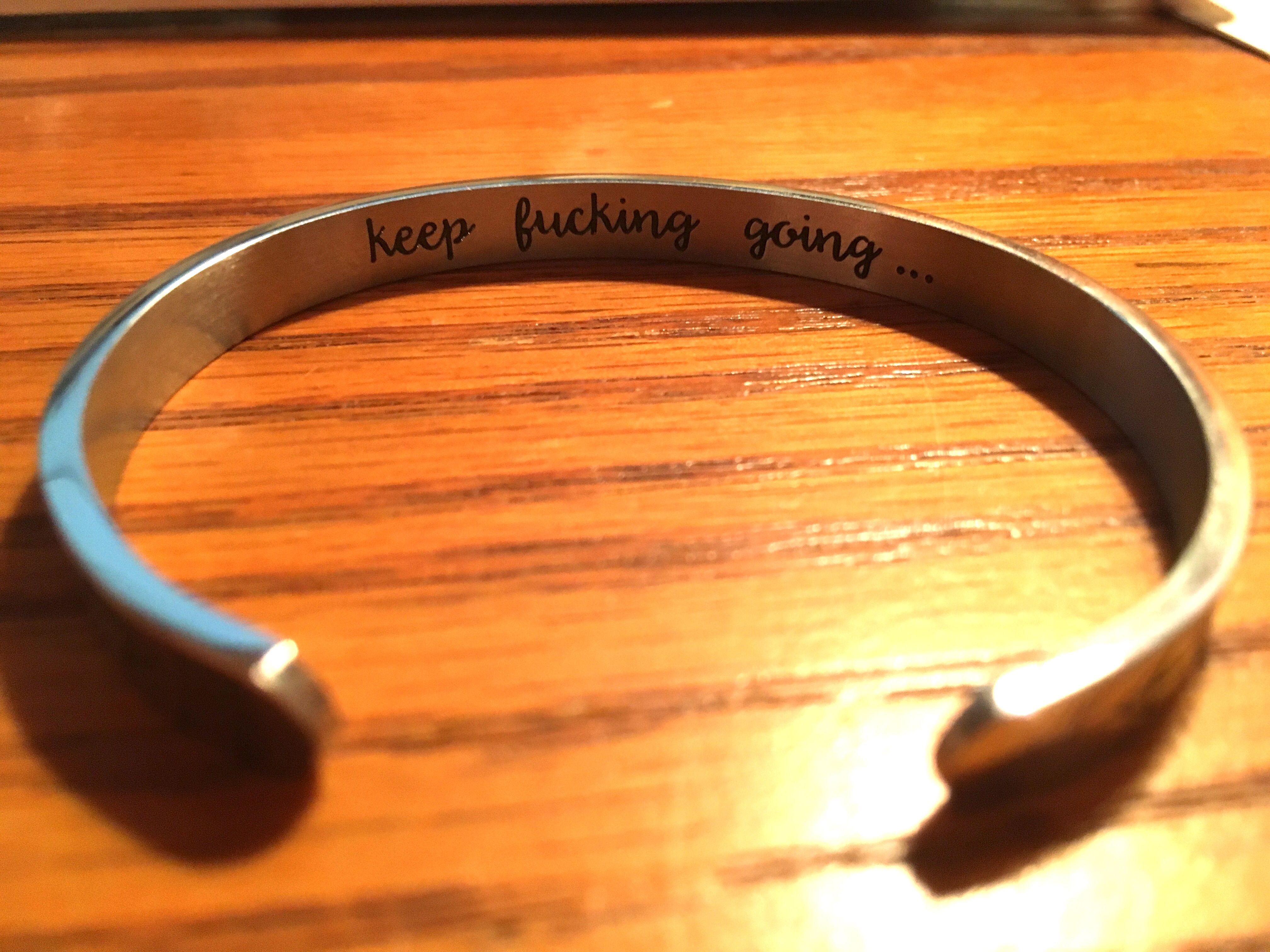 Stay tuned for the beautiful story behind this bracelet.