Where's the Rest of the Band?

We had our last show of 2019 this past Saturday, a bar gig in Ames and a 144 mile drive (each way) from our house. I was stepping over guitar cases on my way to my piano stand when I saw Dennis with both hands in his hair and a look of horror on his face. “I forgot the mixer. I forgot the damn mixer.”

We travel with approximately 500 pounds of gear, enough gear for a seven piece band: four guitars (two electric, two acoustic), a keyboard, a fiddle, a snare drum and a cymbal, two porch boards, one pedal board, two monitors, two speakers, three mic stands, two speaker stands, a keyboard stand, a five slot guitar stand, a snare drum stand, three vocal mics, one fiddle mic, instrument DIs and all manner of cables. We also carry two small suitcases full of CDs, t-shirts, stickers, and a clipboard mailing list. ("You're a duo?" is a question we often get asked after someone has been watching us set up.)

So, sometimes we forget things. It’s truly rare and I don’t know how we don’t do it more frequently, but it does happen. Some of the things we have forgotten have felt pretty critical; for example one time we (okay, I) forgot a guitar (I brought an empty case — oops). One time we forgot our guitar stand. I can’t even remember some of the other things, it happens so rarely and they were so insignificant.

But a mixer? Well, that’s kind of the entire hub of the sound system. We’re kind of screwed without it. Especially in a bar, where the likelihood of being heard with a full PA is still a crapshoot. I could see Dennis panicking. We were two and half hours from home. We don’t know any other musicians in Ames. 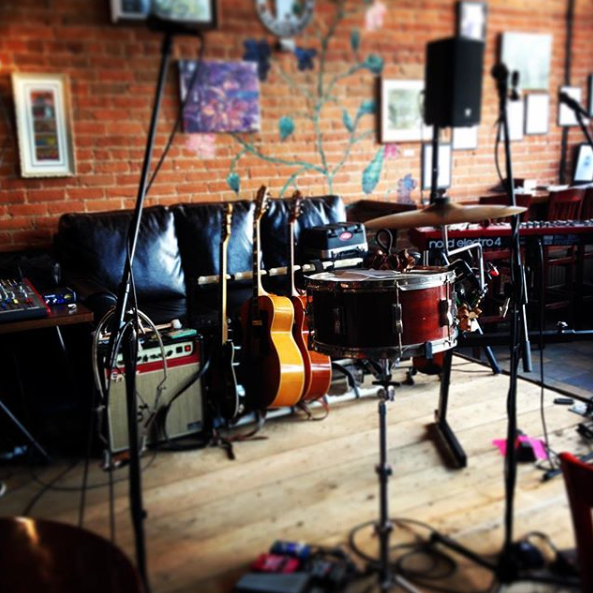 We travel with a lot of stuff. Sometimes we lose track of something.

And this, my friends, is when social media really is the shit. I jumped on Facebook. I sent messages to the people I knew in Des Moines. I posted on an Iowa musician group I belong to. And people stepped up. Gave me names, shared my post, shared it to other groups on Facebook.

While I made my mad scrambling plea to Facebook, Dennis was talking on the phone. He had thought about trying to rent a mixer last minute from a music store (how we were going to return it when we’d be leaving after midnight, he hadn’t entertained) and I assumed that’s who he was talking to. But when I walked over he was standing in front of a poster for a band playing the same venue in two weeks.

If you have ever paid attention to band posters, you know there are a few essential elements on every band poster: date, time, venue, sometimes a website, sometimes a ticket price. There is never a band member’s phone number. Well, almost never. Because there it was, the phone number on the bottom of the poster and that’s who Dennis was talking to.

The short and happy ending to this story is that a complete stranger, who did not know us from Adam, volunteered to make the drive from where he lived to deliver a mixer we could borrow for the show. Dennis and I both know that, in spite of occasionally being forgetful (or more likely, just overwhelmed), we are both extremely responsible with our gear. We are not reckless or careless and we don’t keep food or beverages near it and we make sure it’s handled and stored properly so it lasts. But we also know that not every band is like that and so for someone to step up to the plate like that was amazing.

When I got back on Facebook to let the people helping us out know we were covered, one friend who had been particularly diligent about getting the word out wrote back and said, “You got one! yes!!! Aaron was starting to load the van. We weren’t going to leave you hanging!”

I wanted to cry. I really did. I know all of these people through music groups on Facebook. But most of them I have met in person only once or twice. We have a shared connection — we’re all Iowa songwriters — but, really, that’s it. And yet. Here they were, prepared to do what was necessary so we could go on with our show.

I know that if the situation had been reversed, we would have been doing the same thing. We wouldn’t have hesitated for a second to jump in. We all are willing to do this because we all know just how challenging this independent musician life is.

But I also believe that it points to something bigger than that. The fact is that, on balance, people are GOOD. Sometimes it feels hard to believe that, with all of the vitriol and hostility in this divided country of ours. But I really do believe it’s true and when we believe in the goodness of people, we see more of it.

And that’s what we left the show with that night, this knowledge, this evidence that we are, in fact, all in this together. It’s part of the ethos of our band name (you know, that society thing) and when we remember that small nugget of wisdom, things really are better. So, do yourself a favor and go look for evidence of goodness in people. I’d recommend not putting yourself in a panic situation to do so, but hey. Whatever works.