There is no such thing as dung lemonade

The last time I showed up on the blog was in December, 2017. Over a year ago. The title of that blog post was “What a Year It’s Been” and boy, we had no idea what we were in for in 2018. If you follow us on Instagram or Facebook, you may have gotten a glimpse of the tragi-comedy we were living in for most of the year. We posted some about it, but mostly I kept the expletives and tears and the-seriously-WTF-is-happening-now? posts to my personal page. Because, you know. Professionalism.

If you somehow missed the insanity, here it is in a rather large nutshell: Midway through our first major tour — a planned run of 5 weeks and 23 shows in April and May — our 1995 Winnebago Rialta blew a head gasket, about 10 miles outside of Santa Fe, on the way to a show that night. Because the saga is not really the point of this blog post and because there is a certain amount of PTSD when I revisit it, I’m going to leave out the gory details, but it involved 7 canceled shows, 6 months without our touring rig, 5 different garages, 4 rental cars, 3 blown head gaskets, 2 weary songwriters, and one new (used) engine, imported from Germany via California. (Yes, we like to sing that list to the Christmas carol I’m sure it reminds you of. No, we’re not writing a song about it. We have plenty of material without revisiting that in our songs.)

Oh, and the New Mexico state attorney general’s office. I’m legally bound not to give the details regarding that case online or on social media or on review sites, but suffice it to say there was a lengthy battle that fortunately did not end up in small claims court, thanks to the advocate at that office. 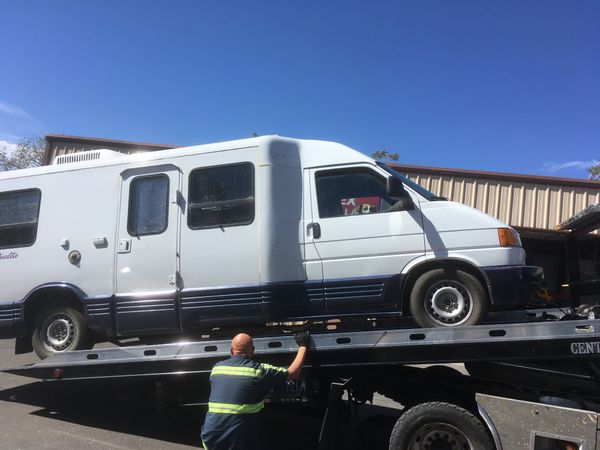 Maisie getting towed along with the Rialta. This was Day 1, Garage 1 of 5. 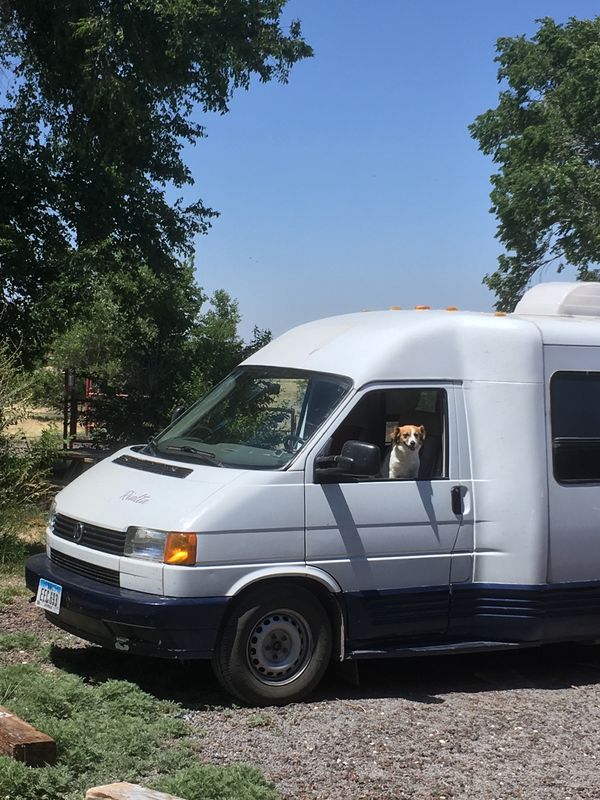 Maisie wondering what's going on at Garage 4/5. She is such a good and patient tour dog.

So, what is the point of this blog post?

In spite of the mayhem, the point is the magic of gratitude and forgiveness. Because despite the thousands of dollars spent on repairs that didn’t hold, cheap hotels, rental cars, restaurants, lost income from cancelled shows, and general heartache, we are both honestly grateful for the experience. (Never mind for the incredible outpouring of support we received from so many friends, fans, and family — but again, that’s a whole other post in itself.) As much as I like to joke about not really needing another “growth” opportunity, apparently we actually did need this one, as hard as that was to see at the time.

When we were completely wrung out from everything (and had long since cancelled a planned tour to the Northwest) we took a weekend in September for our very first at-home meditation retreat, something Dennis touched on briefly in January’s blog post. We stayed home, unplugged the phones, turned off the computers, read, meditated, and rested. Man, did we rest. We had no idea how bone tired we truly were until we stopped running, stopped fighting, just stopped. And we got a glimpse of how to sit with this mess, how to sit with each and every mess we are handed in life. I read a book by a Buddhist monk called Who Ordered This Truckload of Dung? and while my literary senses were not exactly stimulated, there was a lot of wisdom in that little book. Let’s face it, we definitely were the recipients of a truckload of dung. 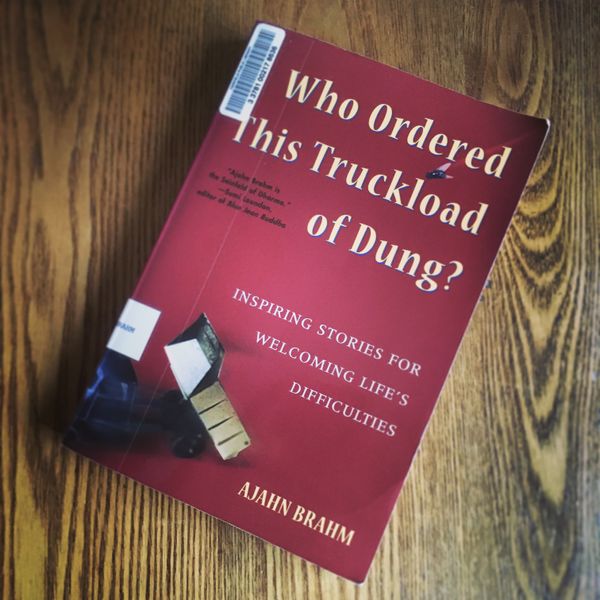 But when the retreat was over, we were still exactly where we were before, at least on the surface. And where we were was that A) our RV had blown 3 head gaskets, from 3 different garages, and no one could seem to figure out why; B) it was looking like the only option was to replace the engine (still cheaper than a “new” RV); C) it’s a 1995 Winnebago built on a Eurovan chassis, with an Audi 5 cylinder engine that was only made for a few years and thus extremely hard to find; D) we had paid multiple thousands of dollars to a garage that was 1000 miles away who was not budging on working with us; and E) we still had plenty of shows and commitments — and our savings and faith were both running low.

I was so angry. So angry and so frustrated and cried so many tears over the injustice, over the fact that I was getting nowhere, that some mechanic 1000 miles away had SO much of our money and we had nothing. That we had spent even MORE money with our trusted mechanic at home who had been unable to locate an engine for the last 3 months and we had no idea if he ever would. I was frustrated with the advocate at the NM Attorney General’s office because I was not sure she believed my side of the story.

On top of it all, I was beating myself up: what had we done to the engine to cause so many blown head gaskets? When the second garage couldn’t repair it after 3 weeks, why didn’t we just have it towed back to Iowa straight away? Why wasn’t I clear enough with the third garage about not proceeding with a multiple-thousands of dollars repair without an estimate? (Yes, that happened.) Why, why, why were the cards always stacked so hard and high against us?

And one morning it came to me as clear as that cloudless New Mexico sky we sat under when we first broke down four months earlier. I had to make a choice, a choice between fighting and being miserable and maybe winning but most likely not — or accepting that we may have spent thousands and thousands of dollars only to end up with a vehicle that at best could be sold for parts, that there was nothing I could do to change that, and that I had best accept it and forgive everyone involved — yes, everyone: the garage owner, the advocate, and most importantly myself — and figure out a way to move on. I read somewhere that resentment was like taking poison and waiting for the other person to die. I had been on a steady diet of resentment poison for months. I was losing my appetite for it.

So I chose the second option. I decided to accept, forgive, let go, and move on. It was not easy, not in the least. Dennis often likes to point out that justice (especially in the grander, non-legal sense) is so important me and so when I see injustice, I grow blinders around my vision and all I can see is that injustice. It’s like my kryptonite. And the closer it hits home, well, the worse that kryptonite’s effect is. Fighting is exhausting, though, and I was so very tired. When I finally chose to let go and forgive, an enormous weight was lifted off my chest and even though exactly nothing had changed, for the first time in months I felt like I could breathe again.

But here’s the crazy part (and, really, the whole point of this post). Within 24 hours of making that decision, I received word from our advocate in New Mexico that the garage would be making an offer of settlement the following week. And that same day, our mechanic here in town called to tell us they had found an engine, via someone in California who imports them from Germany (an engine with fewer miles on it than ours) and that they would credit us from the initial work they did towards the new engine.

It was like whoever is in charge of things (God, The Universe, or my personal favorite nickname, Dave — whatever you want to call that nebulous entity we sometimes feel, sometimes doubt, but somehow in the end learn to trust is there) said, well, it took you awhile, but you figured out how things work, so here you go. Everything is better now.

And it was. Everything was better. It took us two more months before the RV was running again (just in time for 2 short tours to Minnesota in snow storms and temps well below normal but hell yes, we took the RV — and winter weight sleeping bags and a whole lot of warm clothes). We still spent more money than we ever care to revisit. I still get PTSD when I think about the experience with the garage in Santa Fe and I’m not sure I ever want to return to a state for which we have always felt a deep connection. But we are still going. We are planning our tour for 2019. We are having faith and trusting that if we keep showing up, if we keep doing our part, everything will be okay.

Everything will be okay. 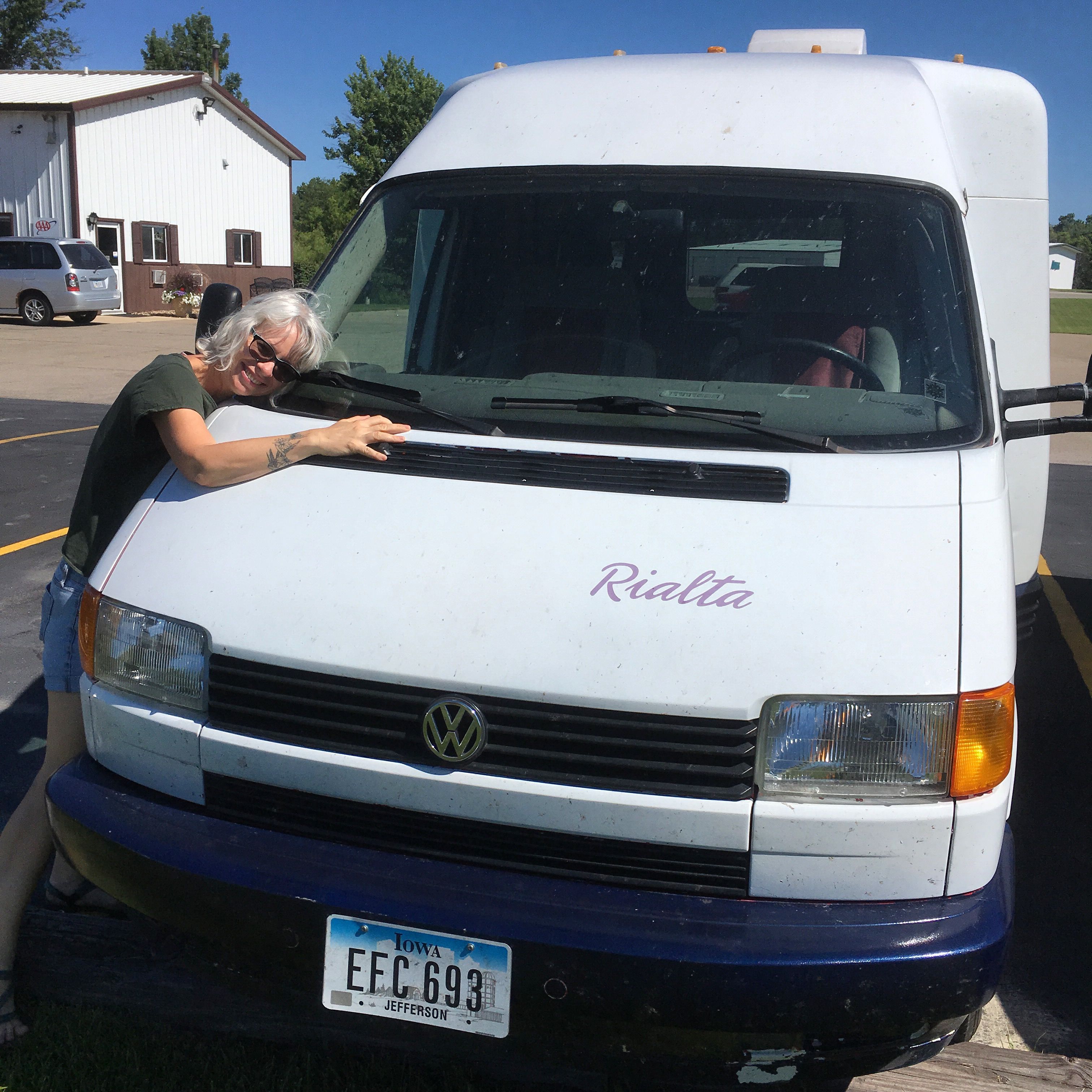 The RV was towed 1000 miles home to Iowa. I actually hugged her when I she arrived home. 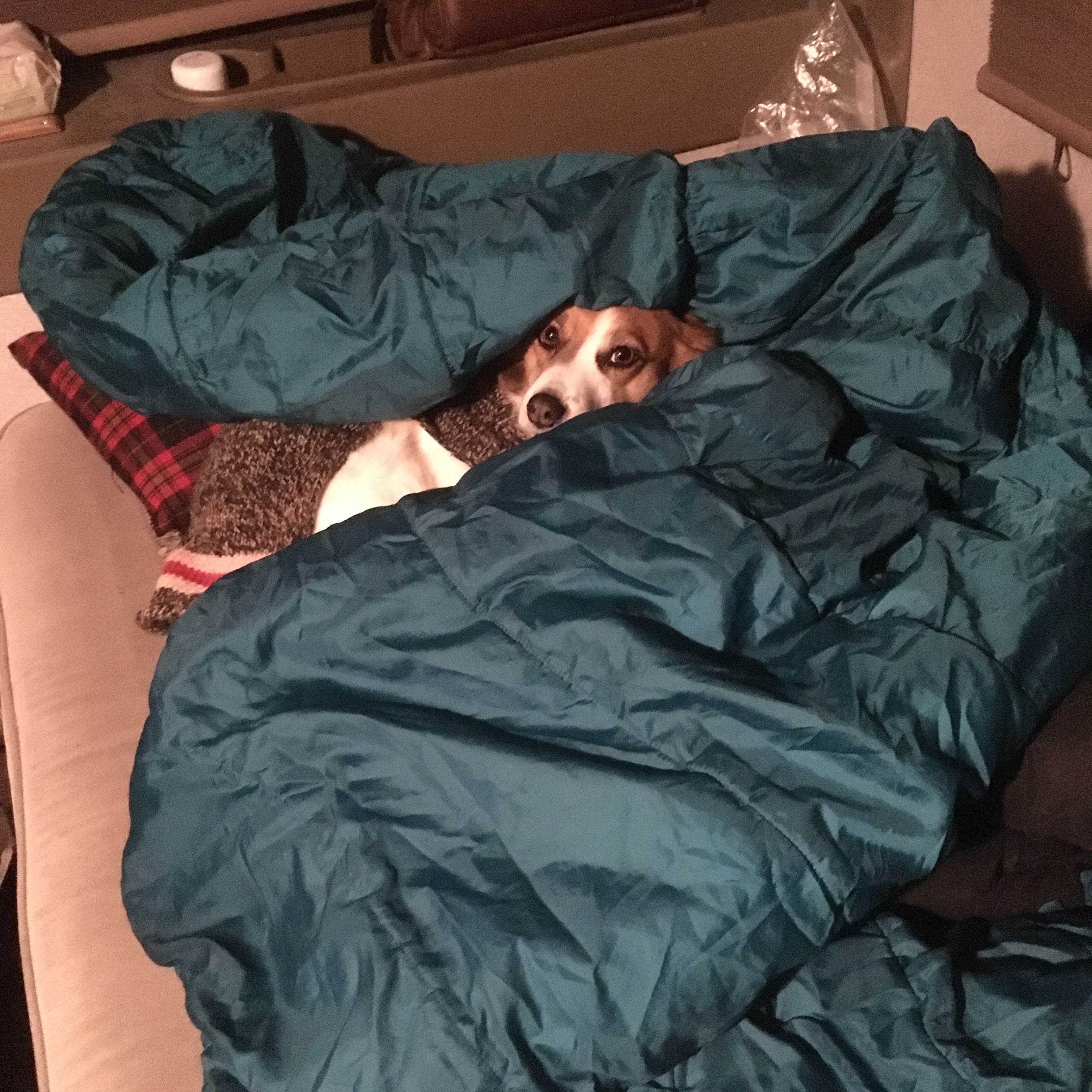 Maisie burrows in on our first tour in the Rialta, 6 months after the breakdown. 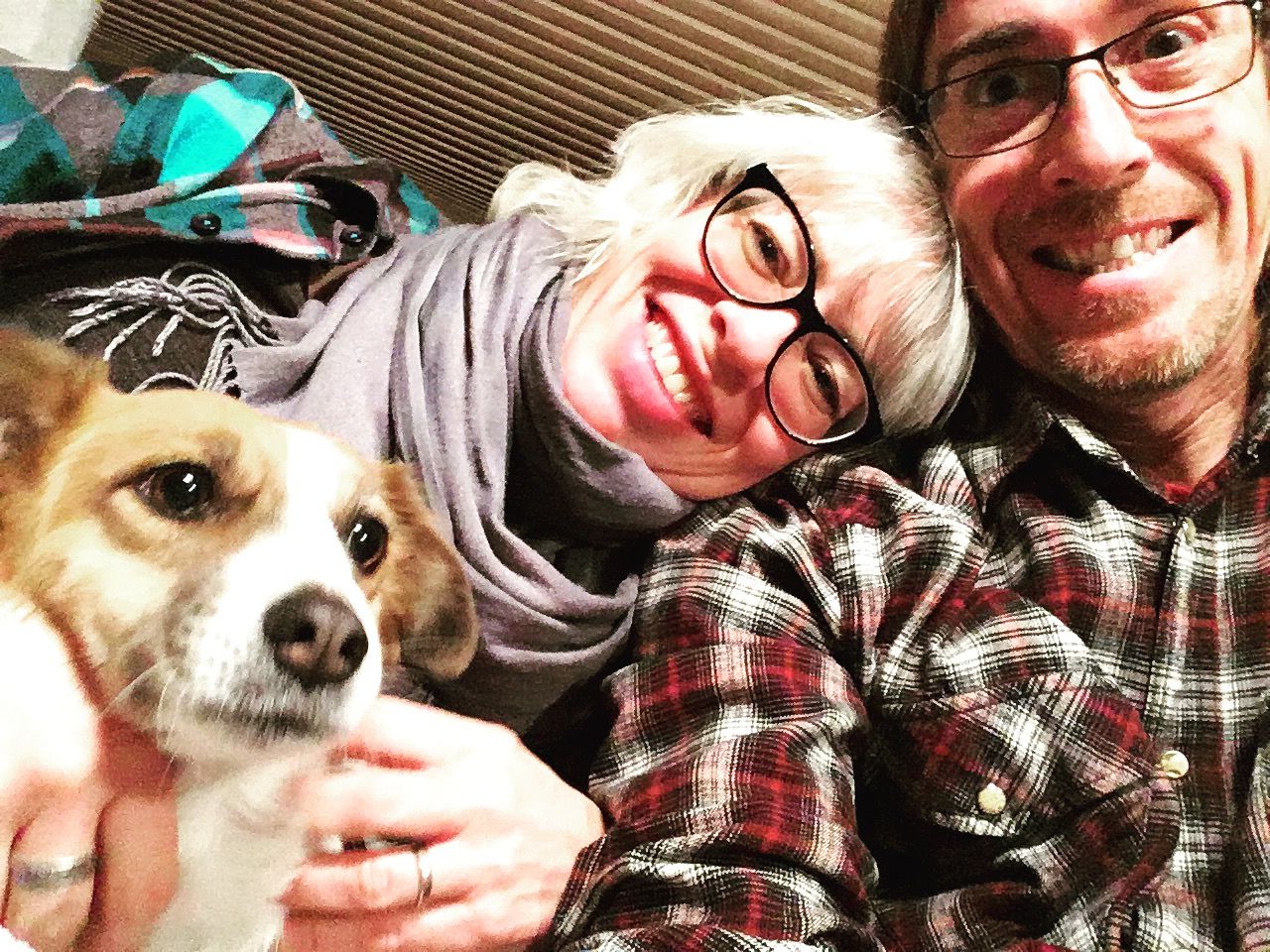 Keeping each other warm on bitter cold night at a Flying J Travel Center in Williams, Iowa. Happily.